It was hardly a traditional Beanstalk Baseball game, and the sky wept due to Paul’s new life in Cincinnati. But Ben, Jack, and I made a Monday excursion to D.C. to witness the Nationals get clobbered by the Mets. 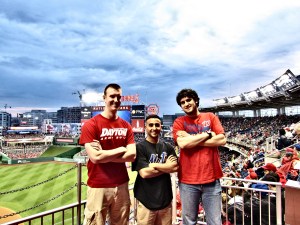 something I really don’t understand since his girlfriend pretty much supports his whole livelihood—so at this juncture our only opportunity for a Nats game hangout was Max Scherzer’s bobble head night. It was an event I knew would be crowded, and resulted in us having to settle for tickets in the 400 level. But with rain in the forecast during this gloomy May, I figured BP was questionable anyway, so the crowd volume (with respect to the rain) wouldn’t end up dampening our trip all that much.

Per usual, Jack and I met Ben at the Springfield metro station. And much to Jack’s chagrin, it was not Ben’s girlfriend who dropped him off. Jack spent the rest of the day moping about that, and the fact that we had to get to D.C. at the “break of dawn” (aka 3:30 p.m.), and tried to convince Ben’s better half to pick him up at the end of the evening because apparently she’s an important part of his social life.

We rode the metro up to the Archives station because there’s a burger joint there of which Ben approved. He takes 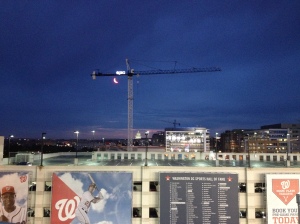 his food very seriously, so I entrusted him with the task of finding the best culinary delights to satisfy our mid-afternoon desires. The place is called “Plan B,” and I warned him that the Catholic Church is against such a thing, but he insisted that these hamburgers were far from sinful—apart from the moral code of my wallet, as I later learned.

After some strangely, nonchalantly slow service, as well as witnessing the tourists outside get poured upon, we finished up around 4:15. I figured BP’s likelihood of existence was minimal, but at the same time I knew we’d still need to get the park decently early to ensure our bobble head acquisitions.

With a bit of time to kill, we wandered over to the Archives because Ben insisted that the incredibly dim light in the rotunda was a spectacle to behold. If you’ve never been, the lighting in the main rotunda of the Archives is far duller than what you’ve seen in National Treasure to protect the quality of the documents (also, you can’t just waltz up the main steps into the building the way Nicholas Cage did).

We wandered over to the metro station and hopped on the green line for a hot few stops before we found ourselves on Half Street at about 5:10. With the bobble heads secure and BP sufficiently rained out, we took a jaunt around the Park and settled down under the cover in section 111 as an overwhelmed and clueless young usher tried to continently come to grips with the hordes of fans huddled in the concourse as the atmosphere again bawled over Paul’s absence. 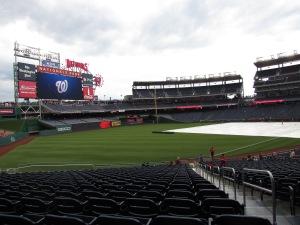 The game was rain delayed until 8:10 p.m., and a relentless chill settled over the ballpark. Ben and Jack both had long sleeves, but I had packed light because my trip to Nats Park 10 days prior hadn’t required a sweatshirt. So as my Floridian genes commenced an allergic reaction and sprouted raised follicles named for waterfowl, Ben and Jack may have been legitimately concerned for my health, so I assured them that despite my apparent discomfort nothing was in fact wrong with me.

As the game began, we ascended towards our actual ticketed seats (preposterous, I know!) only to find that they were positioned directly under the end of the upper deck’s roof. That’s no problem because the rain was over, right? Well, all the water from the storm had dripped off the roof and pooled on the ground in our row. So we had to hold our bags on our laps and watch like peasants from the rafters. 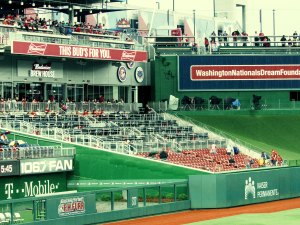 A half inning of discomfort later, we descended back down to the field level to go eat at the Red Porch. Ever since last August when Ben and Jack somehow attained the Holy Grail at the Red Porch—a waiter that was either high on life or drugs (or both), who undercharged them—Ben has wanted to return to find out if he could attain the same fortune.

Since it was only the second inning, the escalators were still going up, so we had to take the system of ramps down. These ramps are a torture device for drunk people, according to Ben.

“I am sure if you tried to roll something down the ramp it would be as if it were on a level-plane,” Ben eloquently said later. These ramps were also our “escape route” in case of emergency, leading me to believe the Nationals’ administration cares so little about the well-being of the upper deck riff-raff since they’ve given us the slowest possible way to exit the stadium.

Luck would not be on our side as our waitress was fully sober. She informed me that hot chocolate was the only soft beverage without free refills, and I knew at that point we had lost Ben’s luck from the year prior. They stopped serving food after the fifth inning or so, which 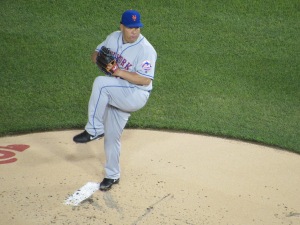 meant that we were allowed to stay in the Red Porch as long as we wanted (normally, there is a one-hour time limit).

As for the game, I made a classic Steve move and missed a three-run homer by David Wright while I was in the latrine. I was back at the Red Porch, though, for when Yoenis Cespedes launched a homer to the right-center field seats. Neil Walker then went back-to-back with a homer to left field. Gio Gonzalez saw his ERA increase by an entire point, and the Nationals’ offense couldn’t scratch a run across after the first inning. The Mets won 7-1 in a game that lasted just over two and a half hours after it finally started.

One bright spot of the evening was Bartolo Colon. He literally didn’t swing the bat, but he’s a joy to watch nonetheless. 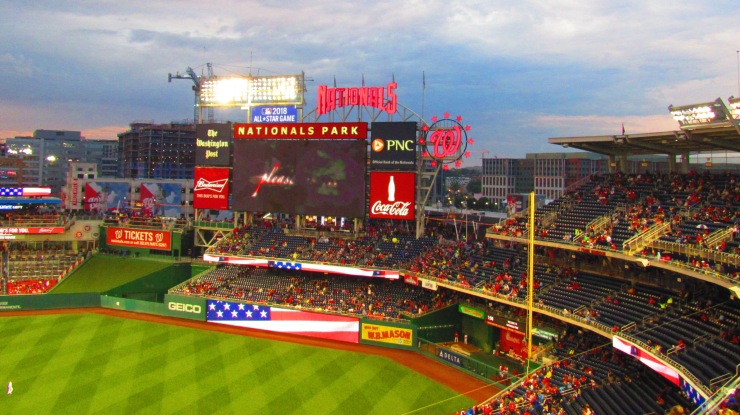 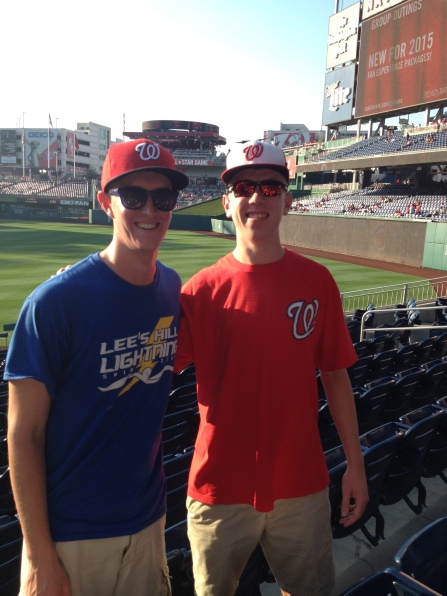 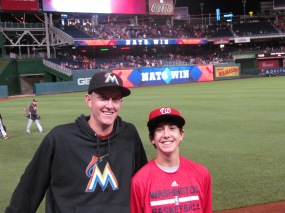 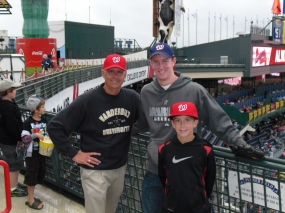 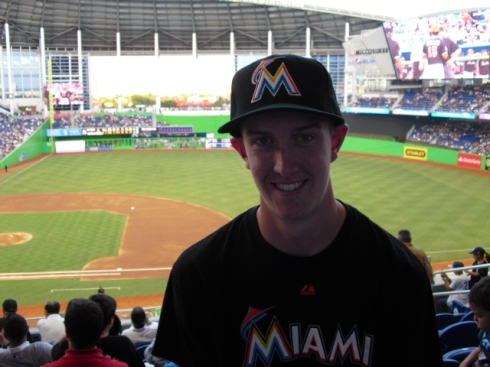 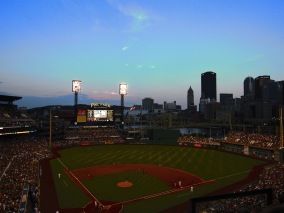 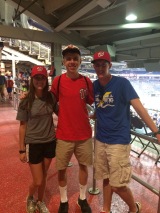 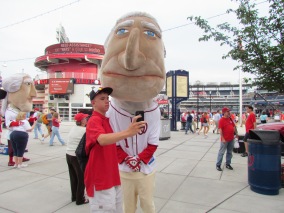 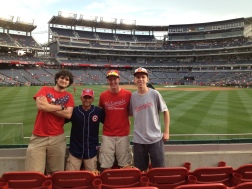 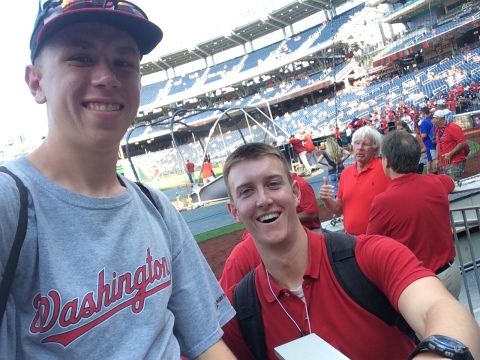 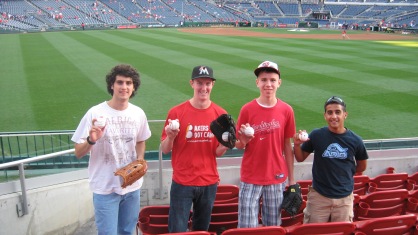 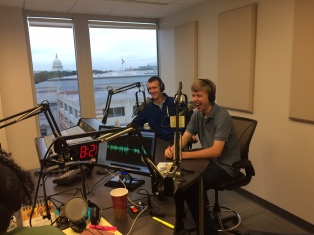